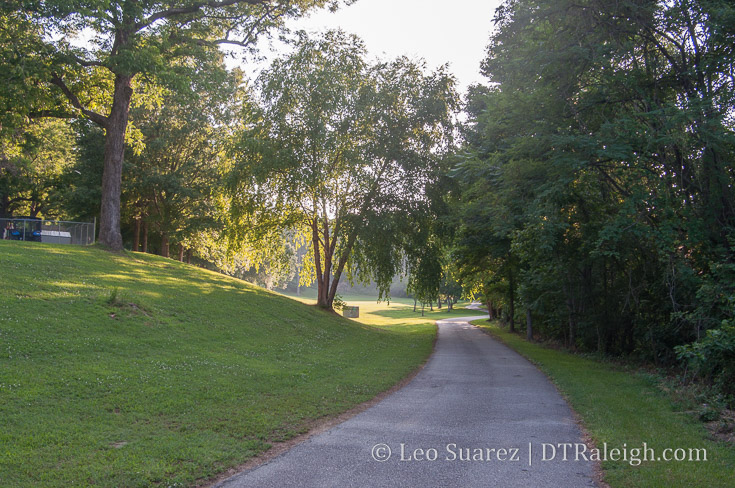 Plans are underway for the Rosengarten Greenway, a path starting from West Cabarrus Street and ending at the Rocky Branch Greenway on South Saunders Street. While neighbors in Boylan Heights and Rosengarten Park work with the city on a final plan, a walk along the potential route got me thinking about some kind of connection from downtown to the future Dix Park.

We’ll get to the Rosengarten Park greenway soon but the topic of connecting downtown Raleigh to Dix Park is laced in opinions. Of course, you are about to get one more but that’s why you come to this blog now isn’t it? ;)

I say it a lot and I’ll repeat it numerous times but debates on walking and biking routes hold very little without actually walking the areas first. Driving is of course the easiest way to get back and forth but a tight-knit urban fabric between Dix and downtown could be a huge boost to living and working here.

At this time, I’m not convinced that walking back and forth is for the casual but rather for the dedicated with time on their hands. I’m not saying it’s necessarily difficult but it’s just far enough to not be convenient and the elevation change makes it feel further than it is on a map.

For sake of argument, I’m going to define the entrance to Dix Park as the “intersection” of Western Boulevard and Boylan Avenue. For this blog post, that is the destination we’ll take a look at. Keep in mind, once you are there, you still need to hoof it up the hills into the park itself to whatever future spot you want to get to.

Without diving into the details, it’s about a 15-20 minute walk from anywhere in the Warehouse District to the entrance. We’re talking 25-30 minutes a little further out, say the Capitol building or Glenwood South. In my book, that puts the walk to Dix in the recreation category of my time. Runners might make it a frequent part of their day though. 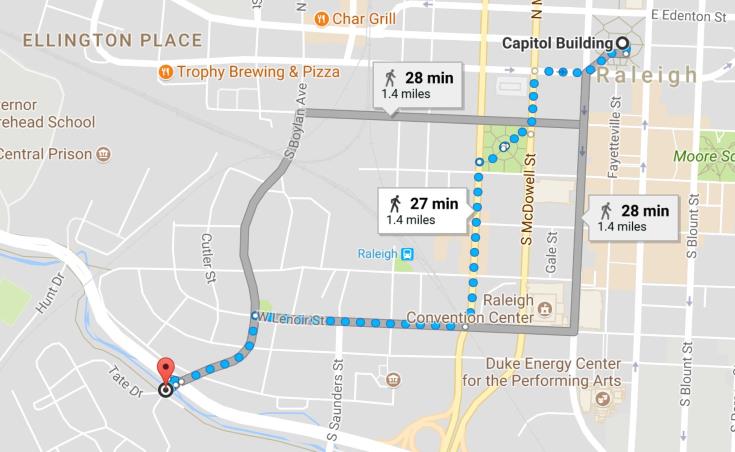 Walking routes from NC Capitol to Dix Park entrance. It’s about 30 minutes from the Capitol to the entrance of Dix Park.

That’s no problem for residents but I don’t see visitors to downtown, staying in the hotels for a visit whether it be for a convention or family event, taking a casual walk out there. I’m not sure it’s enough to justify any special walking paths anyway.

To the south of downtown is the Rocky Branch creek. Parts of downtown slope downward towards it, dropping almost 80 or 90 feet in elevation. You’ll feel those hills on a warm day.

I’ll leave the walking piece of this to the small group of dedicated peds. It’s the cycling route I’m interested in. With a Bike Share system coming next year, cycling out to Dix would be a great to-do when staying in downtown. Cycling would be much more pleasant compared to that previously mentioned walk and drops the time down to 10 minutes on average.

The Rosengarten Greenway likes to be thrown in to the conversation of connecting downtown to Dix. You can dive into the project on the city’s website. 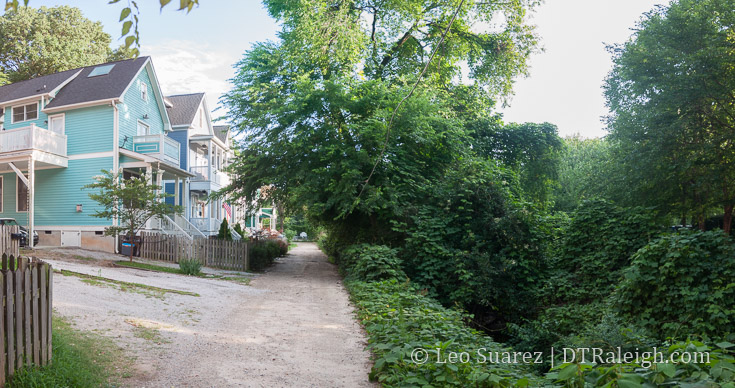 Starting at Cabarrus Street at Rosengarten Alley, the goal is to connect a greenway to the current Rocky Branch trail. (which is south of Western Boulevard) In the past, (2009ish) a more lofty plan existed but with new developments taking place since then the path has been modified some. Below is what we have from the past plan and the latest from the city’s website. 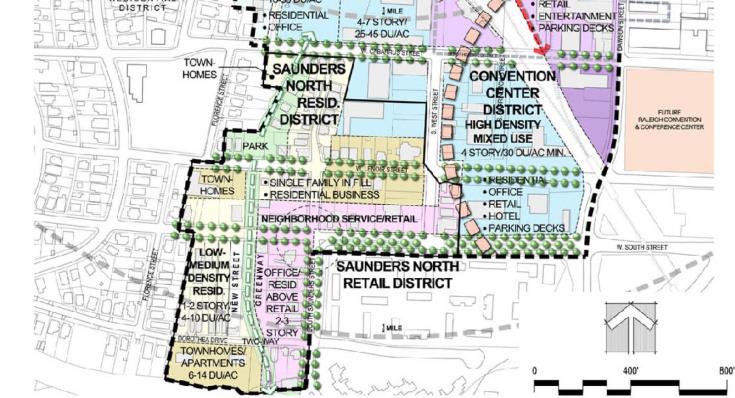 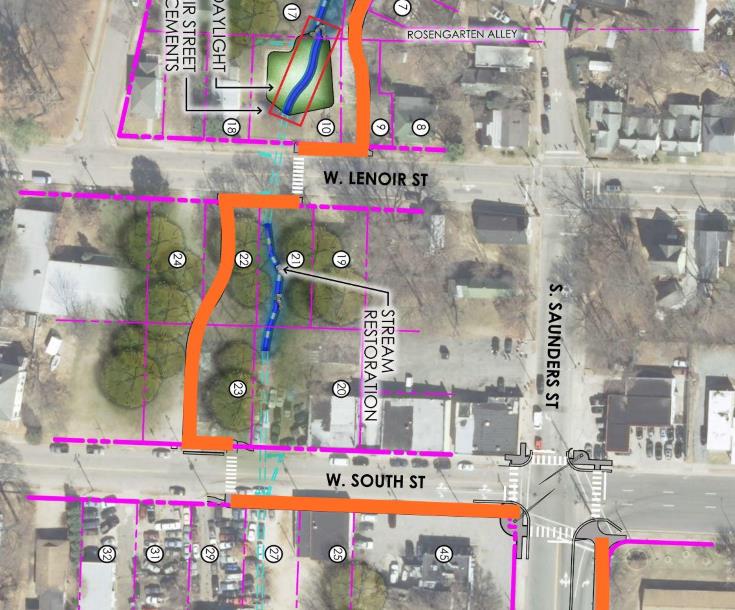 Rosengarten Greenway plan, 2017. Originally in gray, I’ve colored it orange so it can be followed easier. Click for larger, full path map.

The latest plan is a little piecemeal, sending greenway riders on a lot of sidewalks rather than dedicated paths. When I walked the proposed route, it was pretty scenic with an overgrown stream going north/south into and then just turned into regular sidewalks.

Whatever “controversy” there is around this path, I can’t see it. It seems like a normal, everyday path to me.

It feels like standard operating procedure here from the city. If there’s an opportunity to put a greenway along a stream, then they will plan it. I think people are getting a little to hung up on the downtown to Dix connection and this greenway is getting thrown into the mix when it really shouldn’t.

The downtown to Dix connection has to be on the streets.

Dix presents a perfect use case for bike share. Steering riders easily between downtown and the park could create a nice downtown to-do for anyone in town.

[For an update on Raleigh Bike Share, hear episode 19 of Inbound Raleigh, a podcast about transit and transportation in Raleigh.]

From Glenwood South and parts of Hillsborough Street, the route is mostly obvious. (the Boylan Avenue downhill speed run)

The two-way conversion of Lenoir and South Street makes it easy from eastern downtown.

It’s the warehouse district that is tricky because of the separation around the tracks at the depot. This is where, I feel, the West Street connection was right-on with creating critical connections in the southwest side of town. 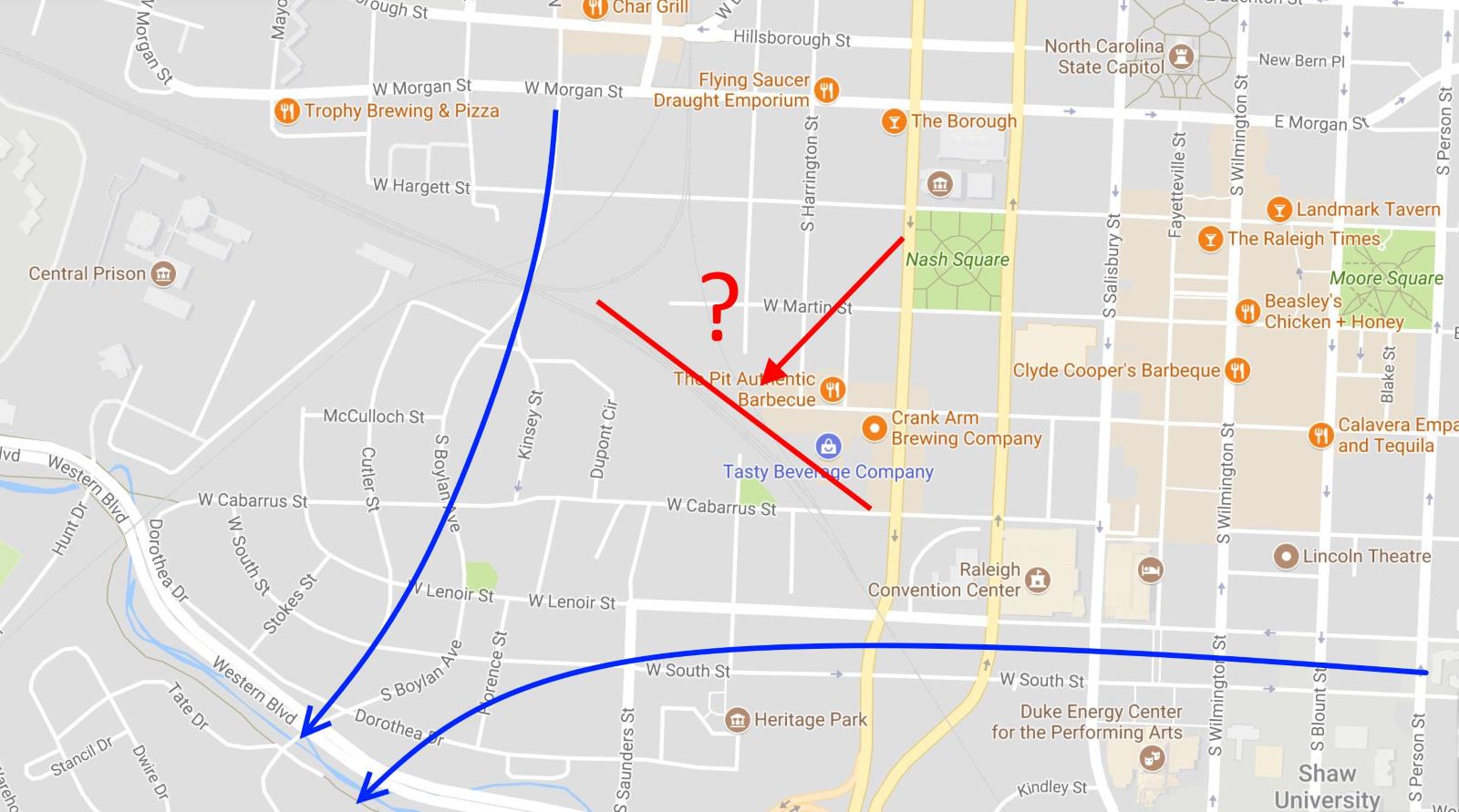 Mentioned in this 2013 post, there were plans to tunnel West Street underneath the tracks in the depot and connect the street to itself.

I haven’t seen plans for the tunnel in 2017 but I do see West Street being a pretty great street for connecting the Rosengarten Park area to the north. While the tracks are active, I imagine it possible for an at-grade railroad crossing for pedestrians and bicycles. Proper fencing and safety gates would be needed to divert bike/ped traffic from around Union Station to West Street south of the tracks.

This would be much cheaper than the tunnel option and examples of this exist in other cities. It would take coordination between the city and the state to get this done. Here’s a rough idea of what it could look like on a map. 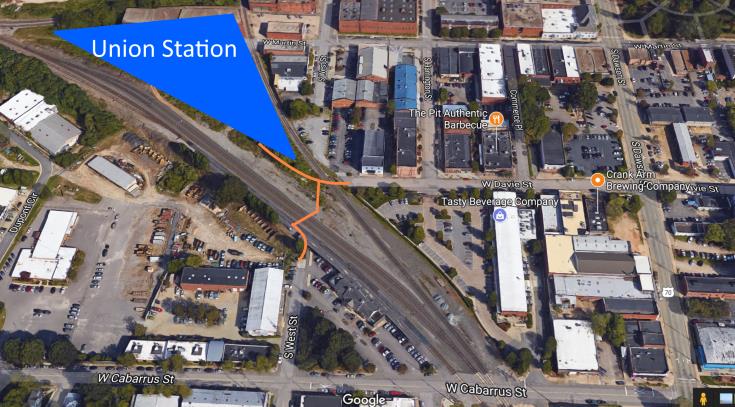 The view from West Street just calls to be connected. Imagine riding a bike back from Dix and be greeted with this view. 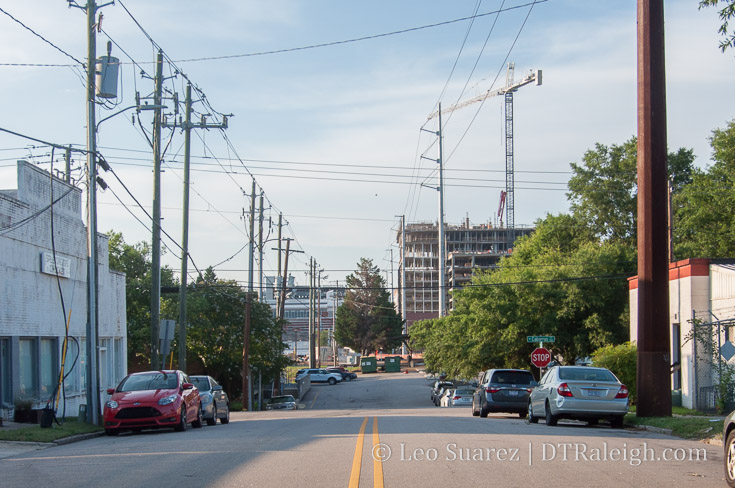 South West Street, June 2017. The Dillon could greet riders and pedestrians here as they come back from Dix.

Southwest downtown Raleigh is becoming a blend of neighborhood mixed-use with retail and residential. Vehicle traffic is slow and vehicle counts are low that the street space can be used for other modes of travel than a car. I’d really like to see rental bikes zipping through that area in the years to come.