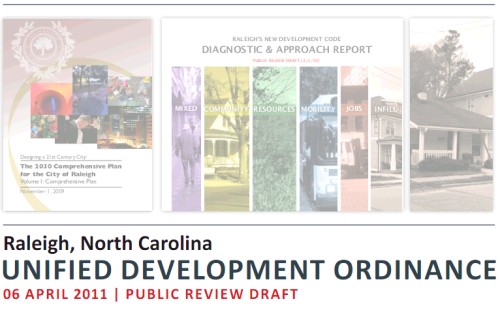 The draft for the Raleigh Unified Development Ordinance (UDO) was released yesterday. Jump right into it at this link or keep reading as I’ll attempt to introduce it and explain why this is important.

For those that aren’t aware, the 2030 Comprehensive Plan was adopted in 2009. This plan is a guideline for how the city should grow over the next two decades. Different areas of the city are zoned differently and suggestions are made on how to handle many topics like parking or open space. The Comprehensive Plan was simply that, a plan.

So how do you get this plan to actually happen? The plan has some areas being higher density than others. Do you just ask developers to build and hope out of the goodness of their hearts they will oblige? In comes the UDO, the tool to get the Comprehensive Plan to happen.

Isaac and Walter come to Raleigh and want to build stuff to make money. They take a look around Raleigh and read up on the development codes to decide what and where they should build.

After looking through all the codes and regulations, Isaac decides he can make the most money by building single family homes on 600 acres off highway 70 in Northwest Raleigh. He even notices that a development like this doesn’t require much city approval and he’ll save money by not having to gather impact studies or public comments about the development.

Isaac presents his plan to the city and the plan is approved because it meets all the requirements.

At the same time, Walter is looking at building near downtown. He too wants to build single family homes but there isn’t enough room for a neighborhood like the one Isaac is going to build. Walter decides to build a medium density townhome complex along Person Street. He thinks his townhomes being close to Krispy Kreme will be a hit.

Walter has to meet the same requirements that Isaac has to but a higher density development like the one he envisions requires a bit more study. Walter needs to get his development approved by more city commissions and he needs to spend more money on gathering the right information to present to those commissions.

In the end, Walter’s development takes much longer to get approved and he spent more money to build his townhomes. He is also lucky that the nearby neighbors didn’t complain too much because the neighborhood’s opinion could have slowed things down even more.

You see, the current state of things in Raleigh almost encourages these sprawling developments because developers, like Isaac, go after the easy build that will get approved with little cost to themselves. The denser developments that Walter wants to build have to go through so much more scrutiny that its amazing people are building downtown today.

Isaac and Walter’s development will change after the UDO is approved and implemented in the next few years. Rather than developers looking around Raleigh for what to build and then having to get it approved, the UDO will tell all developers what we want, where we want it, and if they want to deliver it will get approved very easily.

For example, if the UDO specifies that we want medium density townhomes along Person Street, Walter can come into Raleigh and say that he is willing to deliver that. Since it’s in the UDO, Walter gets the approval and he can start building. No big review, no long discussion, done and done.

This UDO is important because it now encourages developers to build what we want by cutting out all the red tape. Low density housing in the suburbs or mega-high skyscraper in downtown, it doesn’t matter. Whenever the developer steps up and says they are willing to build what is in the UDO, it’ll be approved.

Now this is a simple way at looking at the UDO but I hope it paints a picture of what the new process will do. You need to care about this, especially if you are a property owner, because development around you will essentially be pre-approved and if someone is willing to build it, it will get done.

I’m working with Philip Poe and some others at RaleighUDO.com to help digest the draft document that was released yesterday. There are a lot of picures in the document but it stills stings to go through over 300+ pages of development code.

I can see the most comments about the UDO coming from transitions and how dense downtown skyscrapers would step down to neighborhoods with historic housing.

I plan to write up some posts on specific sections of the UDO on RaleighUDO.com so follow along over there.

I also want to highlight some UDO workshops that are coming up soon. This is a great way to learn and ask questions. The kicker about this UDO draft is that public comments on it are only being taken for two months, ending June 6th, so writers seem to be scrambling to try and go through it and get the word out.

Let me know if you have any questions and I’ll try my best to help out.

Three meeting times to choose from—
SAME MEETING, DIFFERENT TIMES FOR YOUR CONVENIENCE