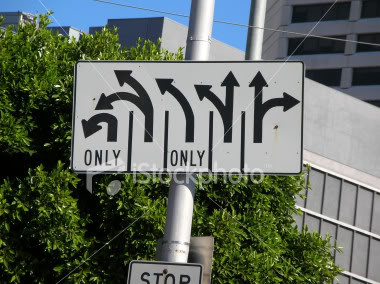 Well not just for the college kids but I guarantee you if you ask a bunch of them on a Wednesday night at Rum Runners, they will have no idea how to get home. There is even a facebook group entitled “Been to Rum Runners a million times and still don’t know how to get there”.

Anyway, so I have heard people complain about how driving around downtown is confusing and that they always get lost. The city wants to try and change that by helping people navigate their way to attractions and parking decks. RalCon is here for that also and I’ve got plans for a nice interactive map showing you where the hot spots are but that project is still in the works. The N&O has got the scoop here. Some quotes:

The city paid a consulting firm $200,000 to come up with recommendations and design signs for its “way-finding” capital improvement project. The firm, Corbin Design of Traverse City, Mich., proposed navy blue and white signs with an oak leaf motif to guide people — in cars and on foot — to downtown attractions and parking.

City officials hope to have many of the new signs in place by the time the new convention center opens late next summer and are eager for public input, said Elizabeth Alley, the city planner who is managing the way-finding project.

……………….
Downtown’s system of one-way streets can intimidate newcomers, the consultant said, recommending that Blount, Person, Edenton and Morgan/New Bern be converted to two-way.