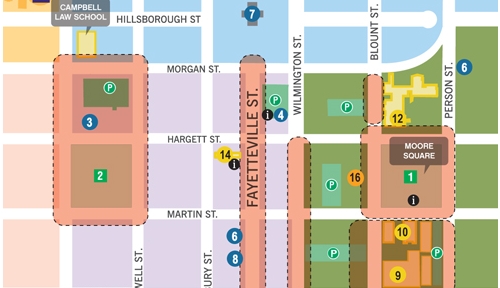 Reading about New York City’s recent expansion of Wi-Fi in city parks made me start to think about what we have in terms of free connectivity to the internets while being outdoors.

As a refresher course for those that don’t know, there is free, public Wi-Fi in certain sections of downtown Raleigh. Take a look at the map above for the covered areas but simply put if you are standing outside and are around:

you should be able to pick up the signal, labeled “Downtown Raleigh FREE WiFi”.

The City of Raleigh provides the Wi-Fi service and you can get more information about it here.

Now having the Wi-Fi is great and all but I’m curious to know how many people actually know about it. Walking the sidewalks of Fayetteville Street, there is no way to know that bandwidth is buzzing around you. I think for some visitors, it would be useful for them to know that they are in an area where there is free, public Wi-Fi.

In a subtle way, maybe it would be helpful to let people know of this service. I put this sign together really quickly to illustrate one possible idea.

The wireless symbols above the 100 indicate that this block has Wi-Fi. Signals on the blue wayfinding signs could also be added. There are lots of ways to go about doing this.

Raleigh residents will soon have another reason to visit downtown Raleigh. The City’s free, outdoor public WiFi network will be available on Oct. 23 for those looking to get online, just in time for the grand opening of the City Plaza and the Raleigh Wide Open 4 celebration on Oct. 24.

Recently, the Raleigh city council has gone ahead and given the OK for public wifi in the downtown area. According to the N&O, the area bounded by Person, Morgan, South and West streets will have free access to the internet over the wifi network. Spending the money for a free service does come with its criticisms as many people are nervous about the economy these days. As a big internet user and downtown resident, this makes my life better, as well as my options for ‘geeking out‘ around downtown. However, the service is not aimed for residents but more for visitors and, as the city’s website states, to:

…support downtown revitalization efforts, including the reopening of Fayetteville Street to vehicular traffic, the opening of the Raleigh Convention Center and the highly anticipated opening of City Plaza in the fall.”

I’m not sure I agree with this wording because vehicular traffic and wifi are not a great match but that is just me being snarky. Anyway, I have never had the experience of using free public wifi even though it is a growing trend in many cities across the nation. I would imagine that wifi makes sense because of the increasing amounts of internet capable devices people are buying. Also, I’m sure it is safe to assume that many of the Raleigh Convention Center’s visitors are from out of town. The laptop is such a common device that many have with them while traveling for business. So does easier access for visitors make a difference? We’ll have to find out on our own but I looked at the City of Seattle to see what they have been doing with their now four year public wifi experiment.

Seattle has a very informative website that talks about the wifi situation in the city. Some of the items they list are its affects on businesses, usage numbers, and future plans for the network. One section, that should be read by anyone interested, is titled “Evaluation: Does It Make A Difference?”. It looks like there was a positive impact and as the website briefly states:

In short, there was an economic benefit seen by about a quarter of the businesses, and users found a great deal of benefit through cost and transportation savings and convenience for personal and business uses.

There is a very thorough 32 page report (pdf) for you to peruse through but I’ll stick to the three page summary for now. Here are some key facts taken from this report:

It looks like Seattle saw mostly positive signs from the wifi in the specific areas that had it. This is just one example out of the many areas around the country that have public wifi so whether the benefits will be the same in Raleigh will have to be seen in a few years. Comparing Seattle to Raleigh is tough but it is good to see other cities having success with their wifi projects. It could be one more benefit to doing business and spending money in the downtown area, where the tax revenue is felt by the entire city. If usage is high once the network goes up this fall, there is the oppurtunity to create revenue from the service in order to possibly pay for itself and future upgrades.

Maybe Raleighwifi.org will get a makeover once the network is up and running.

“The City of Raleigh Information Technology Department has issued a request-for-proposals for the design and installation of a WiFi network in Downtown Raleigh. The goal of the project is to offer free, outdoor public WiFi access in the downtown area bordered by South Street, West Street, Morgan Street, and Person Street.”

“The City of Raleigh Information Technology Department has issued a request-for-proposals for the design and installation of a WiFi network in Downtown Raleigh. The goal of the project is to offer free, outdoor public WiFi access in the downtown area bordered by South Street, West Street, Morgan Street, and Person Street.”