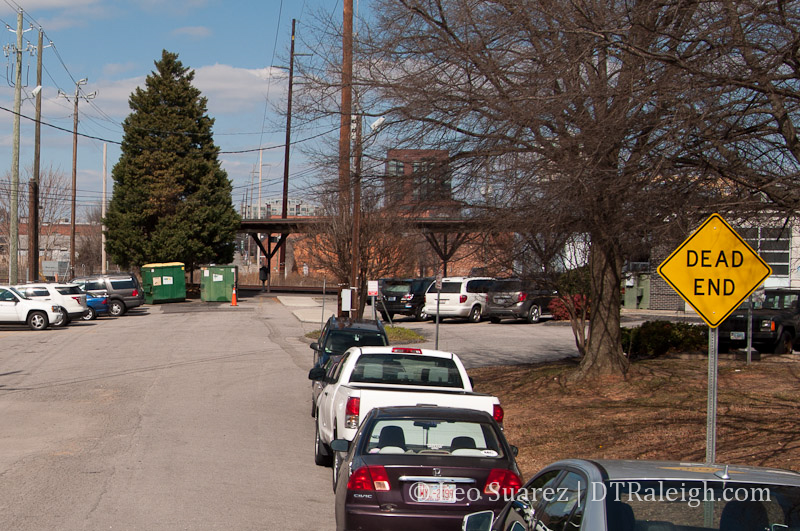 To piggyback on last week’s post about Raleigh Union Station, this week we can talk about the West Street Extension.

The project plans to connect the part of West Street most people know in the warehouse district to the almost two block section of West Street that exists around our current Amtrak station. The street is essentially divided by the railroad tracks so to pull this off, we’ll have to take the street over or under.

This is an unfunded project that is working its way through the environmental and traffic studies. The results from this will be used towards attempts in getting funding. That work could wrap up in late 2013 with design work taking place in 2014. Construction start will all depend on that $.

Two alternatives are currently on the table so let’s go through each one.

Simply put, this alternative has West Street descending into a tunnel and going under the railroad tracks. The information shows that the descent of West will go from Martin, below the tracks, and back up to meet Cabarrus Street.

Retaining walls will be used from Martin to Cabarrus so the sidewalks in front of buildings will probably feel elevated, separated from the actual street. It’s also important to note that a bridge will have to be built in order to support the tracks that now go over the street.

Below is a modified map of this alternative as well as a street cross section. Click for larger views. 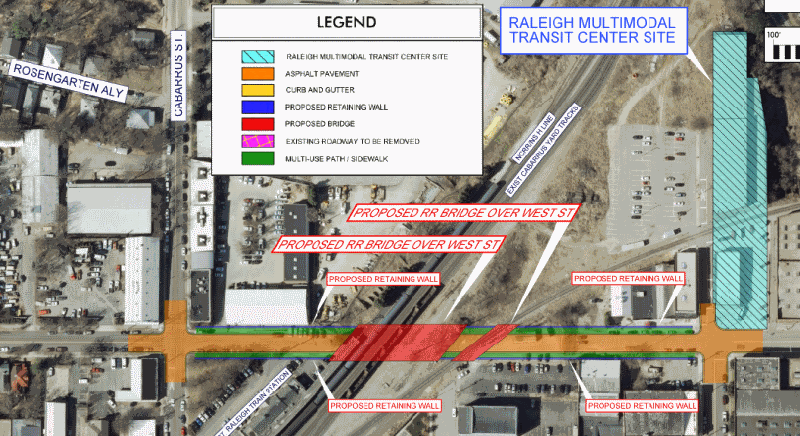 The second alternative has West Street going up and over the tracks. Like the Road Under Rail alternative, retaining walls will exist for the bridge. Since going over the tracks requires more vertical clearance (23 feet) than under (16 feet) the West Street bridge here has to start and end further back.

According to the plans, retaining walls would go from beyond the West/Martin intersection as well as past the Cabarrus/West intersection. As the plans say, “Project would eliminate access to Cabarrus St from West St” including the closure of Martin Street to West.

Maps and cross sections below. 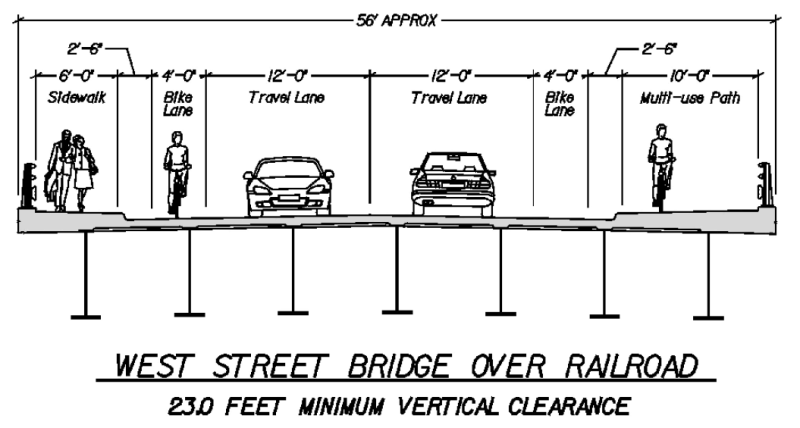 Another factor to be aware of is the fact that the Union Station platforms will close Cabarrus Street at the tracks. This will happen whether either West Street Extension alternative is chosen.

Closing of Cabarrus Street at the tracks

In my opinion, the Road Under Rail alternative seems to be the better option.

I’m a fan of maintaining as much street connectivity for as many different types of users. The closure of Martin to West and the closure of Cabarrus to West to vehicles seems too drastic. Here’s a mockup, using Google Maps, of what the area would look like if the Road Over Rail alternative was chosen. 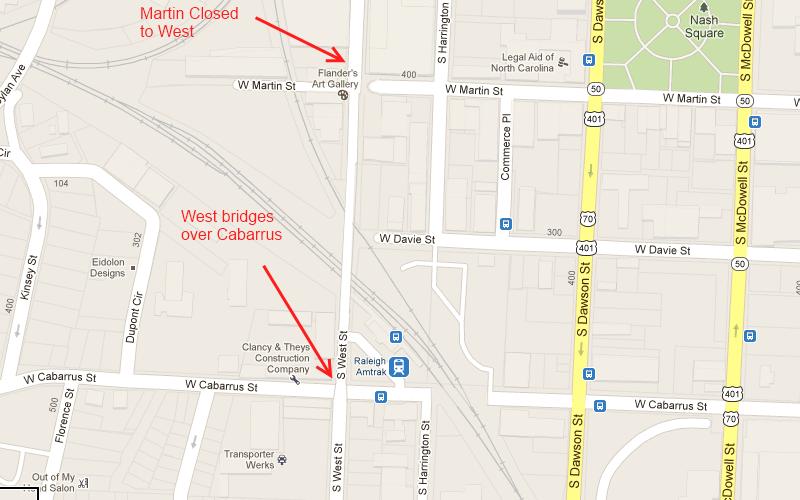 In this section of downtown, vehicles could not travel from east to west.

The Cabarrus Street crossing will still be closed in the Road Under Rail alternative but at least we have a 4 way intersection at Martin/West and Cabarrus/West.

There is hope for pedestrians and cyclists that use Cabarrus as the city is studying alternatives for access across the tracks. I would highly recommend that readers who want the city to try and find ways to maintain bike/ped access around these obstacles to let our city staff know. (via the project page)