Plans for more apartments popped up on the city’s website, this time on the 800 block of West Morgan Street. The sites are mostly empty now, parking lots really, except for the building that the Goodnights Comedy Club currently occupies. The plans would lead to the demolition of that existing building.

In the future, around 400 apartments and ground-floor retail would be built. You can see an artist’s rendering of the project above. The site is a little more interesting with it being along that “curve” where Morgan shortly travels North/South and then changes to East/West.

Articles are stating that Goodnights is looking for a new home which is good to hear. Let’s hope they stick to downtown Raleigh.

It’s unfortunate that a building in downtown with a more interesting facade couldn’t be saved or incorporated into the new development. Even just saving the front doesn’t seem to be in the plans but we’ll have to wait and see. Raleigh doesn’t seem to have a track record of doing that kind of thing too much, although there are some examples. See the Lumsden Bros. Building as well as the nearby Raleigh Industrial Bank Renovation.

I still see a lot of positives here with a future with 400 apartments and more retail spaces along a walkable, urban street. The development is still in the early phases at this time and I’m not aware of a zoning request either. The Goodnight’s property is zoned for seven stories max while the adjacent lot along the Morgan Street “curve” is capped at four.

[This guest post comes from Joseph Havey who represents Travelhost Magazine of the Triangle, which seeks to “help visitors to the Triangle area make memories to cherish a lifetime.” Contact me to put your original content about downtown Raleigh on DTRaleigh.]

This past weekend, Drew Carey headlined at Goodnight’s Comedy Club in celebration of the club turning 30 last October. As you can imagine, every show sold out.

Aside from cheesy high school talent shows, Goodnight’s hosted my first experience with live comedy. I went with a couple of friends: They paid, and who was I to turn down a free laugh? We ate at the Old Bar downstairs (Goodnight’s is sandwiched between two restaurants) before heading up to enjoy the JJ Walker show. It was Dy-no-mite! At 20 years old, I waited a while to join the ranks of the club’s audience — a decision I’m kind of regretting. I left that night with stomach pains induced by my bellowing laughter. 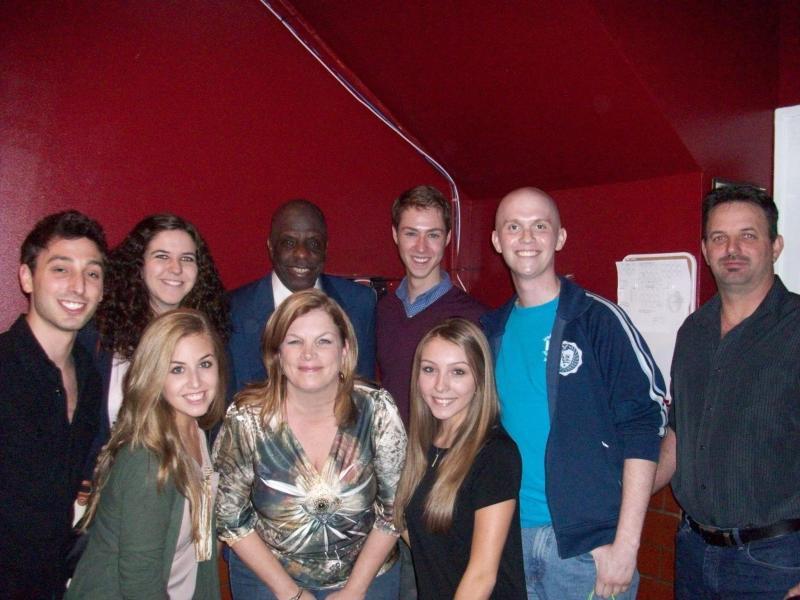 JJ Walker and my friends at Goodnight’s

The atmosphere is what you’d expect in a comedy club—brick walls, dim lighting and free-flowing alcohol. The staff was more than accommodating and the food was delicious. Goodnight’s owners Brad and Shannon Reeder have done a great job ensuring that the experience is top notch.

The Reeders actually met at Goodnight’s (back when it was called Charlie Goodnight’s), in the middle of one of Brad’s comedy tours. They dated, and eventually married, while Brad was on the road, but decided they wanted to settle in Raleigh. The couple bought Goodnight’s several years ago and have been running it ever since.

This past weekend, I got to talk to Shannon about the club’s 30th birthday. She was happy to point out that Goodnight’s is one of the few independent comedy clubs still standing, which makes its age a pretty big deal. It’s also scored a spot on several “Top 10” lists, including that of The Wall Street Journal and USA Today.

“One of the top comedy clubs in the country is in Raleigh’s own backyard,” Shannon told me.

Thinking back to my aching abdominal muscles, I undoubtedly agree.