Registration for this year’s Citycamp NC is open to the public and once again, I’m helping spread the word about this fantastic unconference. In its sixth year, Citycamp NC continues to get bigger and this time will be in downtown Raleigh at Nash Hall.

The final list of speakers is still being finalized but to give you a hint of what to expect, the event will include:

From the inspiring lightning talks during the first night all the way to through the weekend sprints, it’s always been an active and energetic event. Let me know if I can answer any questions that you may have. 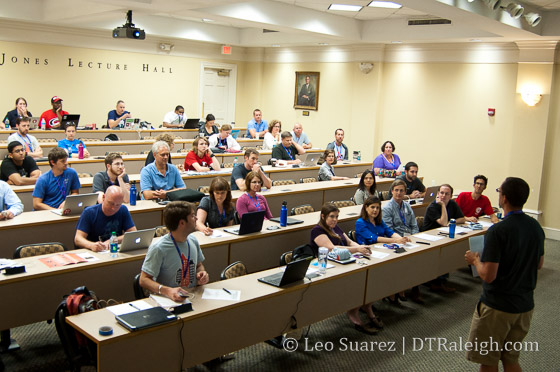 CityCamp presentations during the 2014 event.

An event that I’m passionate about, CityCamp NC, is coming up soon and I want to encourage readers to consider attending. The annual unconference focuses on conversations around how government, businesses, and citizens can use technology to create solutions. Come listen to talks and even participate in a team that could walk away with a cash prize.

At different parts of the event, you can hear talks about what is going on around us such as government/citizen collaboration, how open data can help teams find solutions, or what problems civic hackers are working on. During the kickoff on Thursday, June 11, we’re taking over HQ Raleigh for networking, lightning talks, and inspiration.

On Friday and Saturday, we’re moving over to the Wake County Commons where we’ll be hearing ideas from participants, start the conversations around those ideas, and teams will start forming. Working demos and pitches on these ideas will be done by the end of the event and judges will help determine the winners.

This is what I love about the event. Inspiration leads to ideas leads to action in such a short amount of time.

For more information check out the official press release and make sure to register soon.

Let me know if anyone has any questions about it as I am a core volunteer for the event this year.

Coming up at the end of this month is the fourth annual CityCamp NC, a civic unconference that brings people and technology together to try and solve issues that our local governments are facing. I’m playing a role as an organizer this year and couldn’t be more excited to help make CityCamp great while downtown Raleigh hosts the event.

Any readers that are involved in civic organizations, non-profits, technology, and various community advocates should take a few minutes and look into what CityCamp is. The unconference format allows for attendants to create the schedule, taken straight from your ideas pitched during the event. After participants vote on the best ideas, teams will start to form to discuss and perhaps tackle these ideas head on.

What’s always fascinating to watch is seeing someone pitch an idea and having a prototype built by the end of the weekend. An example that I keep going back to is RGreenway, a greenway navigation smartphone app that was born from a CityCamp weekend.

There’s also the possibility to walk away with some prize money. The team that submits the best idea and pitch will win $3,000.

Register for your spot as seats are limited.

Last year, CityCamp Raleigh raised the bar on the city’s adoption of open-sourced solutions and helped bring citizens to the problem solving table. This weekend, the gang behind the event are hosting it again with the same $5000 prize for the best idea and solution.

Within a year, CityCamp has been at the root of a few accomplishments in the city as the website states:

Here are some of the ways the first CityCamp Raleigh was an inspiration or catalyst in helping to advance open government and create next-generation solutions locally:

CityCamp now sets up Raleigh for even more throughout the next year and everyone is invited to the free event this weekend.

Register for all or just parts of the CityCamp weekend.

See and hear more about CityCamp.

Campers on the last day of CityCamp Raleigh prepare their presentation.

The first ever Citycamp Raleigh was a huge success. The Friday government and business panels were thought provoking and insightful about how data can be used if it was opened up to the public. The unconference format was a perfect fit for the many discussions and brainstorming sessions that took place throughout the day Saturday and Sunday. After this weekend, I’m inspired and motivated to demand that our city, county, and state open up more data to the public for our consumption. Transit, parking, zoning, crime, pollution are all examples of the types of data being gathered already and could potentially be released to the public.

A really great story I heard during the CityCamp discussions was of an open data experiment that took place in Washington DC. The city of Washington DC opened up their transit data in a friendly format for web and app developers to play with. In a short time, many applications were created by citizens or small companies. While most failed to take hold, the few that did stick eventually became adopted by many users of the transit system.

What I like about things like this is that the city does not spend money on one application and we are forced into that one environment. What are the chances that it may fail? By opening up the data and allowing independent developers to take a stab at making an application, we can learn what works and what doesn’t before the city spends money. The risk is lessened this way.

I could go on and on about the benefits of open data and how other cities are embracing this philosophy but I’ll stop here and move on to the city council agenda for this week, the meeting on June 7th, 2011. Here in the special items section:

Open Government/Open Source Systems
During the May 3, 2011, Council meeting, Councilor Gaylord presented a resolution
concerning open government by encouraging the use of open source systems and insuring
open access to public data. It was directed that the item be placed on the May 17, agenda
for consideration.

During the May 17, meeting, several questions were voiced by Council members and it
was directed that the item be placed on this agenda for further consideration. A copy of
the proposed resolution is included in the agenda packet.

If you support this and want to see more data available to the public then I want to ask readers to e-mail their councilors and tell them to adopt this. Info to get it done is below.

E-mail the entire council at: citycouncilors@raleighnc.gov

Write your own e-mail or copy and paste this one.

Have you registered yet for CityCamp Raleigh? It’s already been mentioned once on the blog so take another look now that the free event happening this weekend may point some cash your way.

The organizers have announced a $5000 prize to the team or individual with the best idea at the event.

CityCamp Raleigh announces a $5000 prize to be awarded to the top group or individual with a technology solution. The prize will be awarded on creativity, execution, and feasibility. Details will be provided at the event.

Technology and government may not seem like a great team but when the two are combined, great solutions to everyday problems can be created. That is what this event is about. There is a growing list of ideas out there already. Dive in and take a look to get the creative juices flowing.

As a reminder, the agenda for the weekend is as follows. 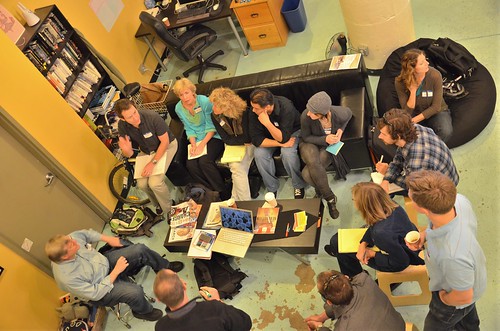