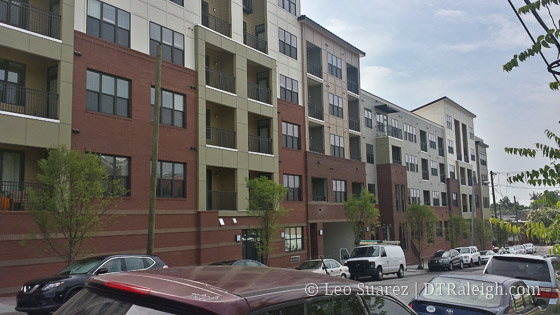 Here are some quick thoughts on the state of new developments that cater to the rental market.

Many more to come?

The downtown apartment mid-rises that have been built over the last few years seem to have a specific formula to them. There are several hundred units wrapped around a parking deck and courtyard. If you add in amenities like a gym, pool, and lounge then you can now, most likely, make a profit providing rental housing.

This isn’t specific to downtown however. Apartment complexes all over the city apply the same formula. The difference is in the built environment. For example, a 200+ apartment complex in North Raleigh may be spread among several buildings (3 or 4 stories) surrounded by surface parking and all the amenities built into a clubhouse.

It’s built this way because it is most likely cheaper and purchasing the available land to accommodate this is cheaper compared to downtown land. Projects are more compact in downtown because of this.

Nothing terribly new or shocking here but to me, it sounds similar to another development model.

Cheap land and a very large footprint is the model behind the big-box retail store. Lots of inventory under one roof and cheap surface parking further keep costs down. This is why there are no big-box stores in downtown, the environment doesn’t fit to the model.

So how are “big-box apartment” projects cropping up?

My thoughts start out with the fact that downtown land is expensive but not expensive enough for these projects. If a nice square or rectangle plot can be acquired (a less complex building is cheaper most likely) then a several hundred-unit building can be profitable.

You also have to consider construction materials. I’ll let any engineers chime in but from what I understand it to be, there’s a threshold around the 6 or 7 story limits of a building. Higher than that, steel construction has to be used and therefore is far more expensive. If you can stay under that threshold and build with wood, then the project is viable.

So if you wanted to build another apartment project, here’s the formula in a nut shell:

The point I want to make here is that between all four corners of downtown, there is a lot of available land to play with. A plethora of surface parking lots that are more valuable than they seem are waiting to be built on.

I’m not an expert on the economics here but it really feels like we’ll be seeing many more mid-rises in coming years. Just take a look at all the available surface parking in downtown Raleigh in the graphic below. 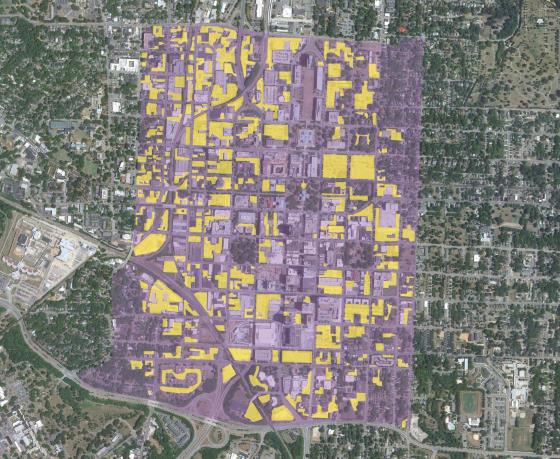 The graphic is a few years old and only a few lots need to be changed but it still makes my point. We have lots of room to grow within.

As far as affordability goes, there is definitely a premium to pay with these new apartments only because they are located in downtown Raleigh. The supply is trying to catch up with demand so right now, the prices are high. (compared to the rest of the city) This seems to happen in other industries also. Prices drop when things have been out for awhile and access is easier.

What people are forgetting is that before 2005, maybe even later, renting in downtown Raleigh was an extreme niche. There were only a few hundred units (if that) spread across random buildings and in small clusters. We essentially had a seedling of a rental community at the time. Then, downtown living become a thing real fast and developers are trying to meet that demand. In the grand scheme of things, everything is still so early. The prices should fall once supply increases and some of the first units to come out start being dated.

If you are a fan of Jane Jacobs then you should believe that to create affordability, you want a mix of housing with a mix of ages. New apartment buildings can command high prices because they are new, have the latest amenities, and styles. Buildings that have a few years on them, may be a little dated but are perfectly fine places to live and priced a little less. Buildings older than that may be even cheaper because they only have one of something or don’t have such and such amenity. You get the picture.

It takes time which is tough for some to realize and puts downtown Raleigh in a awkward position because all this rental housing is really just starting to be built. We don’t have that history and those range of options like the rest of the city has.

Still, I don’t think it should surprise anyone that the development will keep coming (my prediction anyway) until land prices increase or market preferences change. I say we continue to cheer on these developments because what we really want is a vibrant residential community with a variety of living options.

We also need some of that available land to be built on so that newer project have to be more creative.

I don’t feel like these mid-rise projects, with their “big-box” footprints and lack of design, are that urban in nature. However, what they are doing is moving Raleigh up just a few more notches on the urban scale. I believe a few less car trips will be taken by these residents and that is the path we must take as we approach a true urban center in the future. It’s transitional and reflective of the current market preferences and political climate that we live in today.

I’d love to keep this conversation going with anyone who has insight on topics like this.