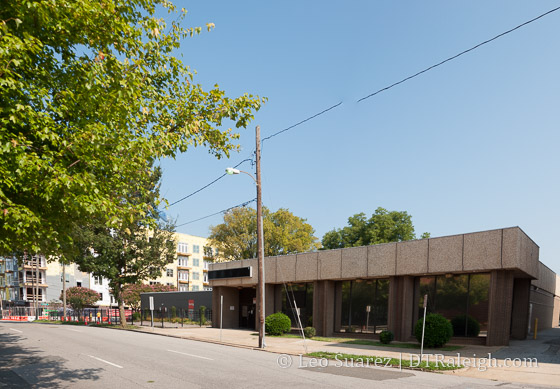 A site plan (SP-53-15) was submitted to the city for what’s being called Greyhound Apartments for 250 units on the west side of the block bounded by Jones, Lane, Harrington, and Dawson Streets. The work is being done by the same group that brought us The Lincoln apartments, Banner Apartments LLC.

The site is made up of three parcels, those being the old Greyhound bus terminal, the one-story building at the corner of Jones and Harrington where Trig Modern is located today, and the single-family house along Harrington Street that was built in 1910. (according to iMaps)

It shouldn’t surprise many that the architect behind this apartment project is JDavis Architects as they seem to be the go-to architect for these types of mid-rises in downtown Raleigh. 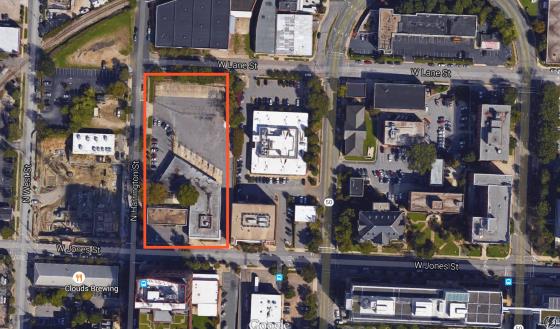 The site plan shows a preliminary plan for the building and reminds me of a modified version of The Lincoln. (no surprise) The northern half of the building will contain a parking deck with the southern half, a courtyard. All of this is wrapped with apartments and won’t be shown to the street.

The parking deck entrance will be on Harrington Street and this site plan doesn’t show any retail spaces. There is a bike-storage room that I haven’t seen in other projects downtown so Bike Raleigh fans should be happy about that.

The Triangle Business Journal has a preliminary rendering that you can see here.

Jones and Harrington is turning into a residential heavy intersection. With real retail still in it’s infancy along Glenwood Avenue, and struggling to be honest, I’m not convinced that retail spaces are needed within these projects right now.