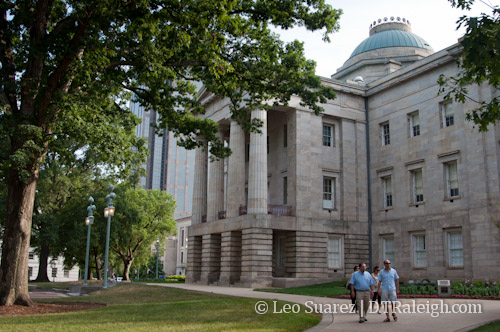 My wife and I were recently traveling around New England and during one of the stops, I had a thought that I wanted to share. One of the things her and I do when traveling into new states in this country is to make a point to visit the capital city and see the capitol. The idea is to hopefully get to all 50 states one day. On our New England journey, we stopped in Augusta, Maine and something hit me as we walked around the building looking for good photo spots. Of the few capitols we’ve visited, there are some located within the city center and others that are not.

That thought doesn’t sound exciting at first so let’s compare a map view of the Maine Statehouse and our North Carolina Capitol.

The thought that hit me was that I very much like how the NC Capitol is part of the fabric of downtown Raleigh and I think it’s clear in the map view above. You can see it when on Fayetteville Street. The Capitol grounds are practically a park and events are hosted there. People walk through it all the time. Because of it’s proximity to the core downtown, the capitol is public space and it mixes very well into our downtown.

I almost had a counter thought though. If you are thinking, like I later did, how can one compare a city of 400,000+ like Raleigh with Augusta, Maine’s 20,000? It’s likely that a larger city will naturally grow up around its capitol right? Well, take a look at the Oklahoma State Capitol in the population 500,000+ city of Oklahoma City.