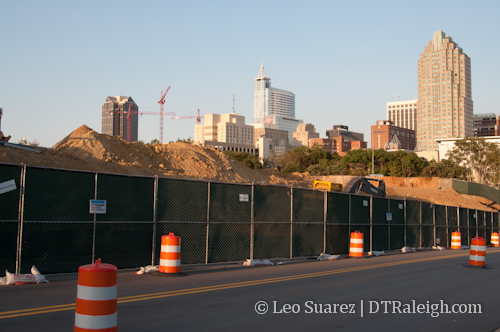 I just want to warn you that this is a weak post but either way, there is construction happening on Progress Energy’s land on Lenoir Street near the intersection with Dawson Street, to the west of the rail tracks. I’m not sure what is being built but my guess is that it is the power station that they wanted to build to support the power demands of downtown.

I do remember this was an issue a few years ago but cannot find the articles online at all. I’ll keep attempting to locate something but comment if you recall any details.

The short version of the story is that Progress Energy wanted to build a power substation where Union Station would go now and that caused some controversy. The story never really seemed to end, unless I missed it in the news or no one was talking about it but now Progress Energy is working on something. Is this the same power station?