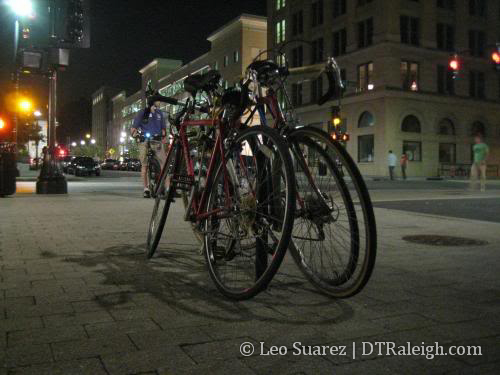 Our last poll results are in for the two month long poll and the obvious is even more obvious. When asked about the activities that visitors generally do downtown, food and drink tops the list. With few major attractions in downtown, eating and drinking is the main draw. This all revolves around downtown’s growing nightlife crowd. If the residential population was larger then the poll may have had a different outcome. I was actually very surprised that no one voted for the Imax Theater. You do know we have one in downtown, right?

The newest poll comes after a recent (and cold) bike ride in downtown. There have been discussions about incorporating bike lanes with Hillsborough Street’s renovation in the section in front of NC State. This does not involve downtown but how would you feel about an increase of dedicated bike lanes on the streets?

The easiest implementation of them would be to mark the lanes separate from the car lanes next to them. We are a long way away from median separated bike lanes so this change would be a little drastic at first. I can see the argument for bike lanes but have always believed in traffic calming techniques so that cars and bicycles can share the lanes together. Cars are not always to blame when there is a bicycle/car accident and negligent cyclists put themselves at risk when they do not follow the rules of the road.

If you currently ride, what changes would enhance the experience? If don’t ride, what is keeping you from ditching the car and riding the couple miles to downtown?