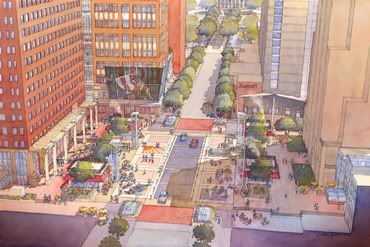 There is a really good article in The Independent about city plaza. I like the discussion about the impact the four pavilions may have on the street feel, whether it will actually feel like an open space or just a block with shops. It’s hard to really predict what the current layout will feel like once it is built but the idea of the space being too crowded never crossed my mind. If you go to the city’s website and look at the renderings, the pavilions do not take up that much space but may detract from the purpose of the plaza. I welcome other opinions on this topic but want to say that I am in full support of the city plaza design and its four pavilions. However, I think to some degree, the 500 block of Fayetteville St. will not be the grand gathering space that the city intends it to be.

If the goal of this area and the plaza design is to create a large gathering place, the “living room” of downtown Raleigh as mentioned before, I believe the people in charge are a bit off target. Fayetteville St. will run right through this plaza up to Lenoir St. Even with no cars parked on this block, there will still be a sense of division between the two sides and people may feel like they are simply gathering on a huge sidewalk. But with the art, the fountains, and lawn elements the plaza may still be a success and draw a crowd because of its heightened aesthetic qualities over other parts of downtown.

The permanent pavilions are important because they offer a more stable service to the plaza. The mentioned alternative was to take out the pavilions and have room for tents that can be taken down in case of large events like concerts and parades. I believe the pavilions are the way to go. There are much more days in a year with regular foot traffic and frequent potential customers downtown then there are events. Even though the events may bring much more traffic to the plaza, I believe that the majority of this traffic does not come downtown as often when compared to residents and office workers. Besides, is it worth getting rid of the pavilions so that an extra, say 100 people, can fit on Fayetteville St. for a parade that only occurs once or twice a year?

I believe the plaza is a focal point downtown, but will not become something that is talked about by visitors. Like I said, I support the current plaza design 100% but do not feel it will be downtown Raleigh’s ‘living room’. It is just a result of the growth in the area and it can happen anywhere else. When someone drives down Fayetteville St. they will notice the art and how nice the area looks but forget about it 5 minutes later when they get on the beltline. Re-name it Hannover Square and call me when ‘Raleigh Grand Plaza’ is in the works on the future site 2 and 3 (my wish anyway).