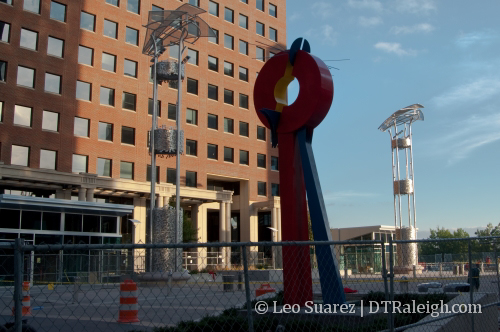 The News & Observer has an article describing the the new art pieces coming to City Plaza and the ones that will be on display for Raleigh Wide Open 4 this Saturday. Craig Jarvis writes:

The most significant additions will be the unveiling of two new pieces of interactive art and the launching of three new sculptures in City Plaza, all along Fayetteville Street. In addition, a gallery will open in one of the four new pavilions in the new plaza and the latest round of art on the sides of city buses will be exhibited.

If you have been following the Fayetteville Street renaissance throughout the last couple of years, you may have noticed that public art for the street has been proposed a few times, each bringing with it its own drama and controversy.

In 2006, “chandeliers” were proposed for the street but were never approved because of a lack of community acceptance. The vista between the Capitol and the Performing Arts Center was seen as too grand to intrude on and talk of Las Vegas style lighting was frowned upon by the community. The privately funded chandeliers were voted down.

That same year, the Raleigh arts community was deep in another controversy, the Jaume Plensa Plaza proposal for the space that is City Plaza today. In early 2006, reports of his hiring to design a public plaza here in Raleigh were circulating. His design, shown below, for the space was bright with LED lights, moving with a wall of water, and open with a grassy field. Again, the grand vista of Fayetteville Street took priority and after the city council paid to create a mock up to see it for themselves, the project still was not going anywhere. Finally, the generous donation by Jim Goodmon of $2.5 million was pulled and that was the end of that. Read this article for a nice wrapup of the “fiasco”. 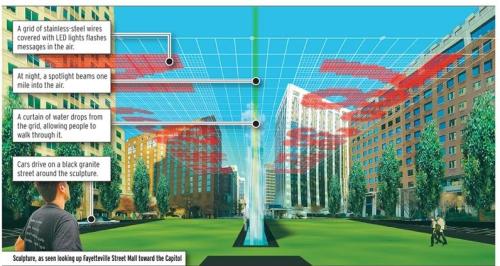 Was Raleigh lacking vision in these two situations or does public art not have the support of citizens and therefore turned down because of that non-acceptance? Lots of private funds were being collected for these pieces so use of tax money could not have been the issue here. I’ll admit, I was a huge fan of the Plensa Plaza in its early days but looking back that was only because I supported something new for Raleigh from someone with a big name. But should we really just approve everything that is proposed without taking careful consideration of it? Lots of commenters on this blog say that they are tired of the city council approving every “weak” development project that is presented to them. In my opinion, I now support the the current City Plaza design better then the Plensa Plaza. (even if Jim Goodmon thinks I’m stupid, video below) We all have our different opinions and I respect those that have a valid argument, for or against mine.

The art on City Plaza is a step up from what we had before on Fayetteville Street and the discussion on the “lost opportunity” of the chandeliers and Plensa Plaza could go on forever. Check out the art installations after the grand opening this weekend and make up your own mind.